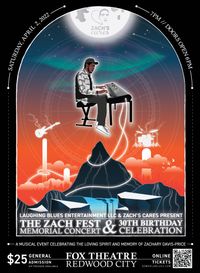 The Zach Fest: A concert celebrating the loving spirit and memory of Zach Davis-Price. For this inaugural Zach Fest we will build a performance lineup comprised of those who had shared the stage with him over the last 14 years of Zach’s sadly short life. This lineup will be announced as acts are added and confirmed.

Tickets are $25. We will soon announce a VIP package. This is an all ages and general admission event.

We lost Zach December 28, 2020 at age 20. He was a friend and comforting presence to many. He grew up in Redwood City, going to schools and working in the Century Theater, La Tartine and nearby. Zach had recently completed his first year of nursing school at the University of San Francisco with a high G.P.A. of 3.98.

Zach loved going to concerts and music festivals for the community experience as much as for the music. He found his own musical voice in the piano and cultivated his own physical voice into an incredible expressive instrument and became a force onstage with “both instruments”.

Zach's birthday falls on April 7. Luckily there was an opening in the newly renovated Fox Theatre's calendar for April 2, 2022. This event will also celebrate his 30th birthday! Along with music there will be a short film donated by “Visual Street Media” with a lookback on this remarkable young man’s life and example of kindness, compassion and empathy.

It is an informed guess that he would approve of this concert event, so let's do it, but most importantly, that it brings people together in doing so! The ultimate goal will be that The Zach Fest will be an annual event.

This concert is being presented by Laughing Blues Entertainment LLC and Zach’s Cares, what will soon be a non-profit organization seeking to improve the education of nutrition and benefits of exercise in the early lives of children in the Redwood City area as well as to lend support to the Recovery Community of which Zach was an inspiring, effective member.